How to Uninstall or Remove Packages from CentOS

Home » SysAdmin » How to Uninstall or Remove Packages from CentOS

Uncesscerary packages slow down system performance and take up storage space. If specific software isn’t being used, then it’s best to remove it, and doing so is easy.

In this tutorial, learn how to remove packages and uninstall dependencies from CentOS 7. 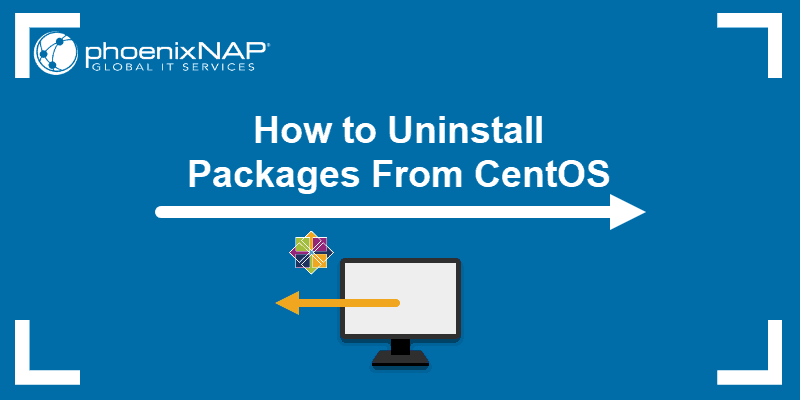 Uninstall Package from CentOS with Yum

To remove a package from CentOS, use the following yum commands:

In the following example, we deleted the Apache web server package, filed under the name httpd.x86_64, using the yum command.

Before removing, the command prompt asks for the root (or sudo user) password, and confirmation that you want the software deleted.

Type in y (for yes) and press Enter. If you have changed your mind, press n (for no) and then Enter.

Finally, the output informs you that the process is complete and shows you which package has been deleted.

Note: Only root users and users added to the sudousers group have permission to install and remove packages in CentOS.

How to Remove Packages with Dependencies Using Yum

Package dependencies are binaries, libraries, and modules on which software rely on. When installing software, it will automatically download and store the required dependencies.

In most cases, deleting software from the local package manager will also erase its dependencies (unless other programs require them).

Still, there are instances in which these dependencies have to be removed manually.

To remove a package and erase all the unneeded dependencies use the following command:

Alternatively, you can alter the yum configuration file  to automatically remove package dependencies when deleting a package with the yum remove or yum erase commands.

Start by opening the yum.conf file with a text editor of your choice:

Then, add the following line to the file: 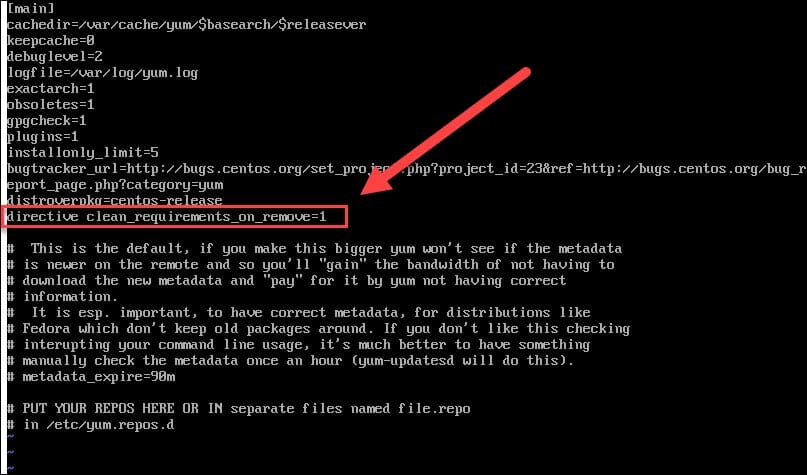 Save and exit the file.

How to Find Specific File in CentOS

In case you need to delete a package but are unsure of its exact file name, you can use one of the following two commands:

The output will list all installed packages with the specified phrase found in the file name.

As you can see in the image below, httpd appears in the following packages (and dependencies):

After you have the exact name of the package you want to erase, you can uninstall it from your CentOS system.

For more options on listing packages on CentOS read our detailed tutorial.

After reading this tutorial, you should now know how to remove packages and dependencies to free up space taken up by redundant programs.

You also know how quickly find specific packages or files you want to delete.

Sofija Simic
Sofija Simic is an aspiring Technical Writer at phoenixNAP. Alongside her educational background in teaching and writing, she has had a lifelong passion for information technology. She is committed to unscrambling confusing IT concepts and streamlining intricate software installations.
Next you should read
SysAdmin Web Servers
How to Use wget Command With Examples
Wget is a commonly used tool for downloading files in a command-line session. Not only is it fast and...
Read more
DevOps and Development SysAdmin
How to Uninstall or Remove Software Packages From Ubuntu
This guide will walk you through several methods for removing old or unwanted software from an Ubuntu Linux...
Read more
SysAdmin
How to Set Up Local Yum Repositories on CentOS 7
In Linux, a repository is a central database of software. Most modern Linux distributions have a central...
Read more
SysAdmin Web Servers
How to List Installed Packages on CentOS with Yum or RPM
Managing a CentOS operating system often means knowing the software packages that are installed. This list...
Read more
© 2021 Copyright phoenixNAP | Global IT Services. All Rights Reserved.