Home » Virtualization » How to Share Data Between Docker Containers

Docker allows users to run various applications isolated from the host computer, without the necessity of having separate operating systems for them to run on. Instead, you install and manage Docker containers with a containerization engine (Docker daemon), which has a similar role as the hypervisor for virtual machines.

As you start using Docker, you will face situations where you need to know how to share data between containers. 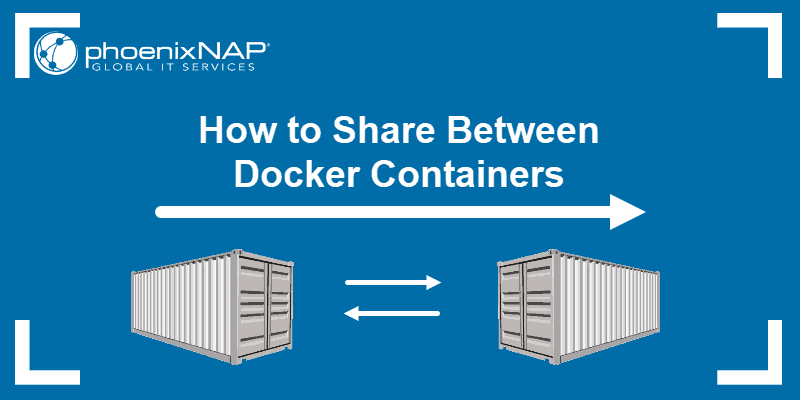 To demonstrate how to share between two containers you need to create a container (Container1) with data volume (datavolume1) you can later share.

1. First, create an independent volume which you will share between two Docker containers:

2. Then, create a Docker container and name it Container1 with data volume attached to it by running the following command:

2. Next, create a file in the data volume and add some text to it:

3. Exit the container with the command: exit

Step 2: Create a New Container and Add to the Data Volume

Next, create a new container (Container2) which will share files with Container1.

1. Create Container2 and mount the volumes from Container1:

2. Add text from Container2 to show that both containers can write to DataVolume1:

3. To exit from Container2 use the command: exit

Step 3: Verify You Can Share Data Between Docker Containers

1. Restart Container1 to check the changes to the data volume:

2. Confirm that both containers can read and write to the same data volume and that the text you wrote in Container2 appears in DataVolume1:

If the text was successfully added to the data volume, the output should display the following:

3. To finish, exit out of the container with the command: exit

Creating a “read-only” Docker container prevents others from making any changes to the data, allowing them only to view the files.

Add :ro to the container name which should be shared but not modified.

In the following example, Container2 will be allowed to see files from Container1 but will not be able to edit them.

To check if Container2 has read-only privileges, try to remove the example file from Container1 by running the command:

The output should show you have successfully created a read-only file. Consequently, other containers can access and view the data, but cannot make any contribution nor changes to it.

Now you know how to share files between Docker containers.

Also, this tutorial explained how to lock your files in Docker containers so that other parties cannot edit or remove them.

Sofija Simic
Sofija Simic is an aspiring Technical Writer at phoenixNAP. Alongside her educational background in teaching and writing, she has had a lifelong passion for information technology. She is committed to unscrambling confusing IT concepts and streamlining intricate software installations.
Next you should read
DevOps and Development SysAdmin Virtualization
How to Set Up and Use Private Docker Registry
By setting up a private Docker registry, you can save valuable resources and speed up development processes...
Read more
DevOps and Development
How To Remove Docker Images, Containers, Networks & Volumes
Docker allows users to create a container in which an application or process can run. In this guide, you will...
Read more
Virtualization
How to Manage Docker Containers? Best Practices
With Docker Container Management you can manage complex tasks with few resources. Learn the best practices of...
Read more
DevOps and Development SysAdmin Virtualization
How to Install Docker on CentOS 7
Docker is an increasingly popular software package that creates a container for application development...
Read more
© 2021 Copyright phoenixNAP | Global IT Services. All Rights Reserved.