All modern operating systems come equipped with a firewall – a software application that regulates network traffic to a computer. Firewalls create a barrier between a trusted network (like an office network) and an untrusted one (like the internet). Firewalls work by defining rules that govern which traffic is allowed, and which is blocked. The utility firewall developed for Linux systems is iptables.

In this tutorial, learn how how to install iptables, configure, and use iptables in Linux. 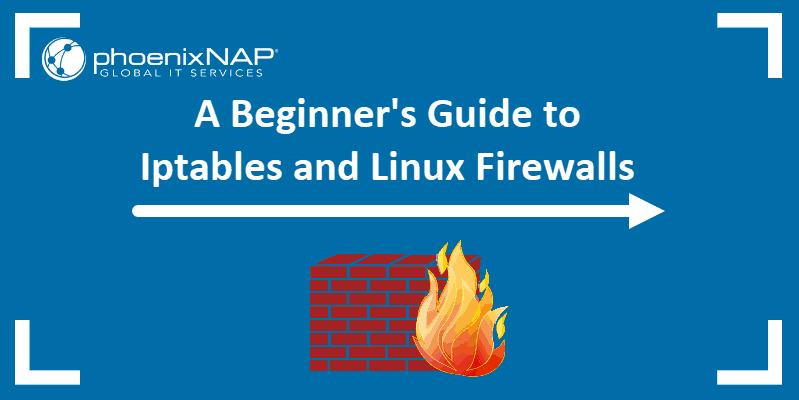 Network traffic is made up of packets. Data is broken up into smaller pieces (called packets), sent over a network, then put back together. Iptables identifies the packets received and then uses a set of rules to decide what to do with them.

Iptables filters packets based on:

Linux firewall iptables has four default tables. We will list all four along with the chains each table contains.

The Filter table is the most frequently used one. It acts as a bouncer, deciding who gets in and out of your network. It has the following default chains:

This table contains NAT (Network Address Translation) rules for routing packets to networks that cannot be accessed directly. When the destination or source of the packet has to be altered, the NAT table is used. It includes the following chains:

The Mangle table adjusts the IP header properties of packets. The table has all the following chains we described above:

The Raw table is used to exempt packets from connection tracking. The raw table has two of the chains we previously mentioned:

Some versions of Linux also use a Security table to manage special access rules. This table includes input, output, and forward chains, much like the filter table.

How to Install and Configure Linux Firewall iptables

Iptables are installed default on most Linux systems. To confirm that iptables is installed, use the following command:

The example output in Ubuntu confirms that the latest version of iptables is already present:

If you want to keep iptables firewall rules when you reboot the system, install the persistent package:

In CentOS 7, iptables was replaced by firewalld.

To install iptables, first you need to stop firewalld. Enter the following commands:

The commands stop and prevent firewalld from starting at boot, and do not let other services start firewalld.

Next, install and enable iptables. First, install the iptables services package with the following command:

This package preserves your rules after a system reboot. The information displayed below confirms that the installation is complete:

Enter the following commands to enable and start iptables in CentOS 7:

The status command confirms the status of the application:

Note:There are two different versions of iptables, for IPv4 and IPv6. The rules we are covering in this Linux iptables tutorial is for IPv4.

To configure iptables for IPv6, you need to use the iptables6 utility. These two different protocols do not work together and have to be configured independently.

In general, an iptables command looks as follows:

Here is a list of some common iptables options:

Iptables is case-sensitive, so make sure you’re using the correct options.

By default, these commands affect the filters table. If you need to specify a different table, use the –t option, followed by the name of the table.

To view the current set of rules on your server, enter the following in the terminal window:

The system displays the status of your chains. The output will list three chains:

It’s safe to allow traffic from your own system (the localhost). Append the Input chain by entering the following:

This command configures the firewall to accept traffic for the localhost (lo) interface (-i). Now anything originating from your system will pass through your firewall. You need to set this rule to allow applications to talk to the localhost interface.

These rules allow traffic on different ports you specify using the commands listed below. A port is a communication endpoint specified for a specific type of data.

The options work as follows:

Use the following command to ACCEPT traffic from a specific IP address.

You can also DROP traffic from an IP address:

You can REJECT traffic from a range of IP addresses, but the command is more complex:

The iptables options we used in the examples work as follows:

If you define dport iptables firewall rules, you need to prevent unauthorized access by dropping any traffic that comes via other ports:

The –A option appends a new rule to the chain. If any connection comes through ports other than those you defined, it will be dropped.

You can use the –F option to clear all iptables firewall rules. A more precise method is to delete the line number of a rule.

Locate the line of the firewall rule you want to delete and run this command:

Replace <Number> with the actual rule line number you want to remove.

Iptables does not keep the rules you created when the system reboots. Whenever you configure iptables in Linux, all the changes you make apply only until the first restart.

To save the rules in Debian-based systems, enter:

To save the rules in Red-Hat based systems, enter:

The next time your system starts, iptables will automatically reload the firewall rules.

After reading this Linux iptables tutorial, you should have a better understanding of how iptables work and how to install the iptables tool.

You can now also configure basic iptables firewall rules for your Linux system. Feel free to experiment, as you can always delete rules that you do not need, or flush all rules and start again.

Dejan Tucakov
Dejan is the Head of Content at phoenixNAP with over 7 years of experience in Web publishing and technical writing. Prior to joining PNAP, he was Chief Editor of several websites striving to advocate for emerging technologies. He is dedicated to simplifying complex notions and providing meaningful insight into data center and cloud technology.
Next you should read
Security SysAdmin
How to Enable and Use firewalld on CentOS 7
This phoenixNAP guide instructs how to enable and start firewalld on CentOS 7. It explains basic firewall...
Read more
Security SysAdmin
How to Enable/Disable UFW Firewall on Ubuntu 18.04
Ubuntu comes pre-installed with a firewall configuration tool, UFW (Uncomplicated Firewall)...
Read more
Security SysAdmin
How to Disable or Turn Off Firewalld on CentOS 7
Firewalld is a dynamically managed firewall solution that supports network zoning. As of CentOS 7, firewalld...
Read more
Bare Metal Servers Security
21 Server Security Tips to Secure Your Server
Hackers are always on the lookout for server vulnerabilities. Minimize risks and be confident your data is...
Read more
© 2021 Copyright phoenixNAP | Global IT Services. All Rights Reserved.