How to Use the Linux sleep Command with Examples

When the user issues a multiple command sequence in Linux, the commands execute immediately one after another or concurrently (e.g., the tee command). However, sometimes it is necessary to postpone the execution of commands and provide enough time for the system to produce the expected results.

In this tutorial, you will learn how to use the Linux sleep command to delay command execution in the terminal and shell scripts. 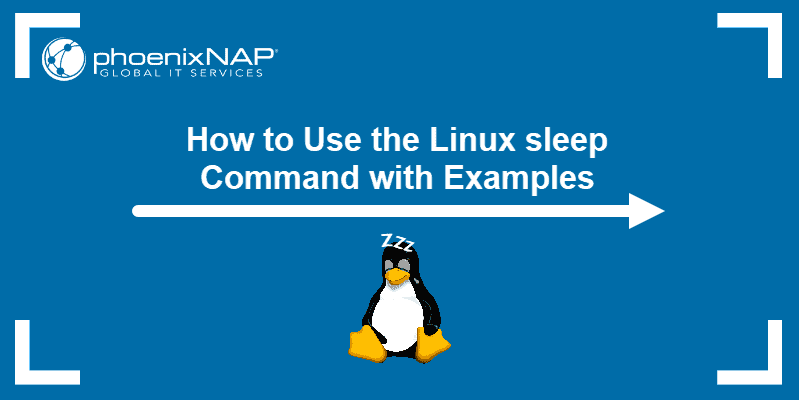 What Does the Linux sleep Command Do?

The sleep command suspends the calling process of the next command for a specified amount of time. This property is useful when the following command’s execution depends on the successful completion of a previous command.

The syntax of the sleep command is simple:

In the example above, after sleep 5 was executed, the second command prompt appeared with a 5-second delay.

By default, the system reads the number after sleep as the number of seconds. To specify other time units, use the following syntax:

The sleep command accepts floating-point numbers. It allows multiple values, which are all added together to calculate the duration of sleep.

To stop sleep after it started and before the specified waiting period ends, press Ctrl + C.

To see help for the sleep command, type:

The following sections contain examples of using the sleep command in the terminal or shell scripts.

Note: The sleep command is designed to work in combination with other Linux commands. For a list of available Linux commands, download our free Linux Commands Cheat Sheet.

Set up an Alarm

Use sleep to tell the system to play an mp3 file after a certain amount of time. The example uses mplayer:

sleep is useful for enforcing a time between the execution of two commands. The following example makes echo commands execute in one-second intervals:

Assign a Variable to the sleep Command

It is possible to assign a variable to the sleep command. Consider the following shell script:

The script defines a variable called SLEEP_INTERVAL whose value is later used as an argument to the sleep command. The output of this example script shows that the execution lasted 30 seconds:

The following example illustrates the use of the sleep command in a script that checks whether a website is online. The script stops if it successfully pings a website, and sleep introduces a 10-second delay between unsuccessful pings.

You may be running a bash script that internally calls two other bash scripts – one that runs tests in the background and another that prints the results. Use sleep to prevent the second script from printing the wrong results if it executes before the completion of the first script:

The kill -0 $BACK_PID command checks if the first script’s process is still running. If it is, it prints the message and sleeps for 1 second before checking again.

Use sleep to allow latency of certain command executions. The script snippet below shows how sleep gives the CPU enough time to perform the calculation before the next iteration.

After reading this tutorial, you should know how to use the Linux sleep command to pause the execution of the commands in a sequence.

Marko Aleksic
Marko Aleksić is a Technical Writer at phoenixNAP. His innate curiosity regarding all things IT, combined with over a decade long background in writing, teaching and working in IT-related fields, led him to technical writing, where he has an opportunity to employ his skills and make technology less daunting to everyone.
Next you should read
SysAdmin Web Servers
How to Use the Linux tee Command
By default in Linux, a command received through standard input writes directly to standard output. The tee...
Read more
SysAdmin Web Servers
Linux Commands Cheat Sheet: With Examples
A list of all the important Linux commands in one place. Find the command you need, whenever you need it or...
Read more
Networking SysAdmin
Linux Ping Command Tutorial with Examples
Most Linux users are familiar with the ping command and know how to use it in its basic form. However, there...
Read more
SysAdmin Web Servers
How to Check CPU Utilization in Linux with Command Line
You have probably noticed your Linux OS slowing down, especially when working harder. Understanding CPU...
Read more
© 2021 Copyright phoenixNAP | Global IT Services. All Rights Reserved.